RWC Named The Home Depot Partner of the Year 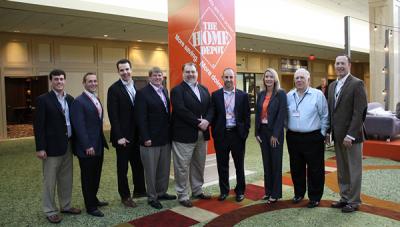 Reliance Worldwide Corporation® (RWC) – manufacturers of SharkBite® plumbing connection products and Cash Acme® valves – was named The Home Depot® “Partner of The Year” for 2014. Recognized for outstanding customer service and partnership, the award was presented during the 2014 Annual Partnership Supplier Meeting.

“This award is the culmination of 8 years of partnership and reflects not only our commitment to The Home Depot, but the commitment to ourselves which is to continuously push the envelope and raise the standard of expectations.”

“It is a privilege to accept this recognition on behalf of the entire company. RWC should be extremely proud of this achievement because it represents our collective efforts. Every department in the company contributed, and each employee should take personal satisfaction in this recognition. The Home Depot specifically singled out our performance during the freeze this past winter. The way the entire company responded demonstrates the quality and commitment to our customer base. We are looking forward to maintaining that same standard this year and raising the expectations for next.”

This prestigious award comes on the heels of RWC’s September announcement to expand manufacturing operations in their Cullman, AL facility. The “Made in Alabama” agreements between RWC and the State of Alabama and the Cullman Economic Development Agency (CEDA) will prompt major investment into new manufacturing, distribution and facilities jobs in Cullman, AL. Instrumental in this partnership were Governor Robert Bentley, Congressman Robert Aderholt, Mayor Max Townson, Secretary of Commerce Greg Canfield, AIDT Director Ed Castile, CEDA Director Peggy Smith and their teams.